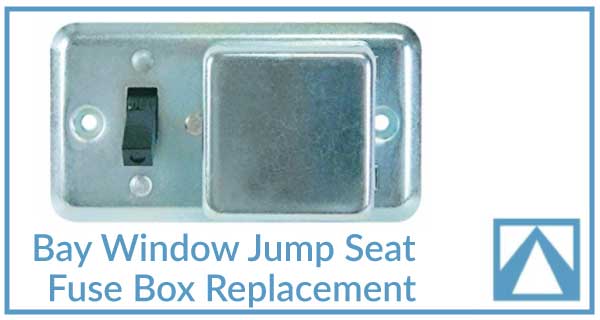 Some parts on these vans are simply not very common anymore.  Finding the jump seat fused switch box replacement for shoreline power today isn’t as easy as it once was.  Back in the day these types of fused switches were common on all sorts of household appliances like bigger coffee makers, ovens, and other similar devices around the homestead.  Now, no-one even knows what to call them or ask for anymore.

On the Bay window Volkswagen van campers the switch often times goes bad or gets broken off by moving around, kids, or falling cargo. Under the square cap cover is simply a 15 amp Edison base old school house fuse.  The fuses are still available at most better hardware stores and electrical supply houses.  This particular application calls for a time delay fuse.  Electric motors like refrigerators take a spike when starting up and will blow a regular fuse simply by starting up.  The time delay allows for the initial power surge and doesn’t blow the fuse falsely.

Shoreline power for 110V has to come into the van somewhere and this is the first place it is fused.  The box is fused so that your appliances in the van won’t burn your wiring in the camper if something shorts out.

This fused switch isn’t a Ground Fault Circuit Interrupter, or GFCI outlet, and replacing it with a GFCI won’t necessarily prevent you from burning up your van by accident.  Use the proper 15 amp fuse with it.  If you want to use a GFCI to prevent shocks to you or others then replace the first outlet after the fused switch box with a GFCI outlet.

It’s best to keep your electrical system up to date and working properly.  Doing so can save considerable loss.  Replacing parts with incompatible parts isn’t a good way to save money or bypass a problem.  It could be causing a new one.  If you are unsure about your setup contact an electrician or an RV shop about having the repairs done.  Replacement is a pretty straightforward operation but if your system has been hacked together or altered significantly talk to someone who is familiar with these types of systems first.

5 Delicious Dishes in Your Westfalia Kitchen

Visibility is not a huge strong point for the Volkwagen Vanagon.  Replacing them with modern LED …